Egghill Church and the Cursed Bell

by The Spooky Attic | Legends and Lore

Bored in our hotel while visiting State College, Pennsylvania for a paranormal conference, we glanced through a tour guide in the room that had a list of local “Haunted Places” to visit for the Halloween season. One place, in particular, caught our attention: Egg Hill Church. It looked old, creepy and had a gruesome legend attached to it. The legend stated that the minister went crazy one day and poisoned his whole congregation, beheaded the Sunday school children in the basement and then buried them all out in the churchyard. Another part of the legend states the minister then hung himself from the bell tower.
Lovely.

We promptly got in the car in search of the church. 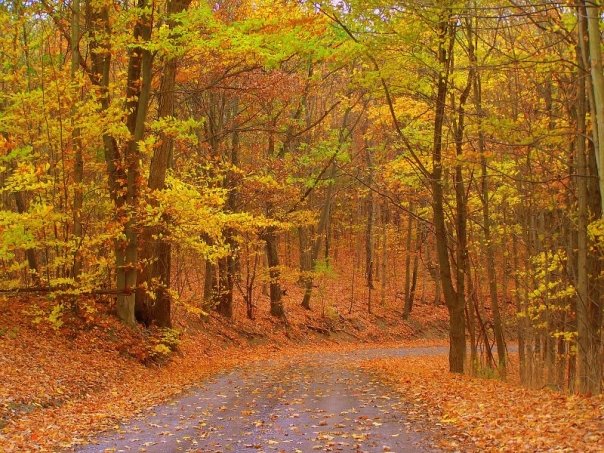 Egg Hill Road in the fall. Photo ©The Spooky Attic

The church was built in 1860 and rests its old bones on Egg Hill Road; a winding, one lane dirt track that makes you forget the world is a crowded place. Our GPS guided us into the backwoods of Pennsylvania. The “creep factor” of Egg Hill Church is high, so it’s no wonder that through the years, it acquired an even creepier legend and has been subject to vandalism. 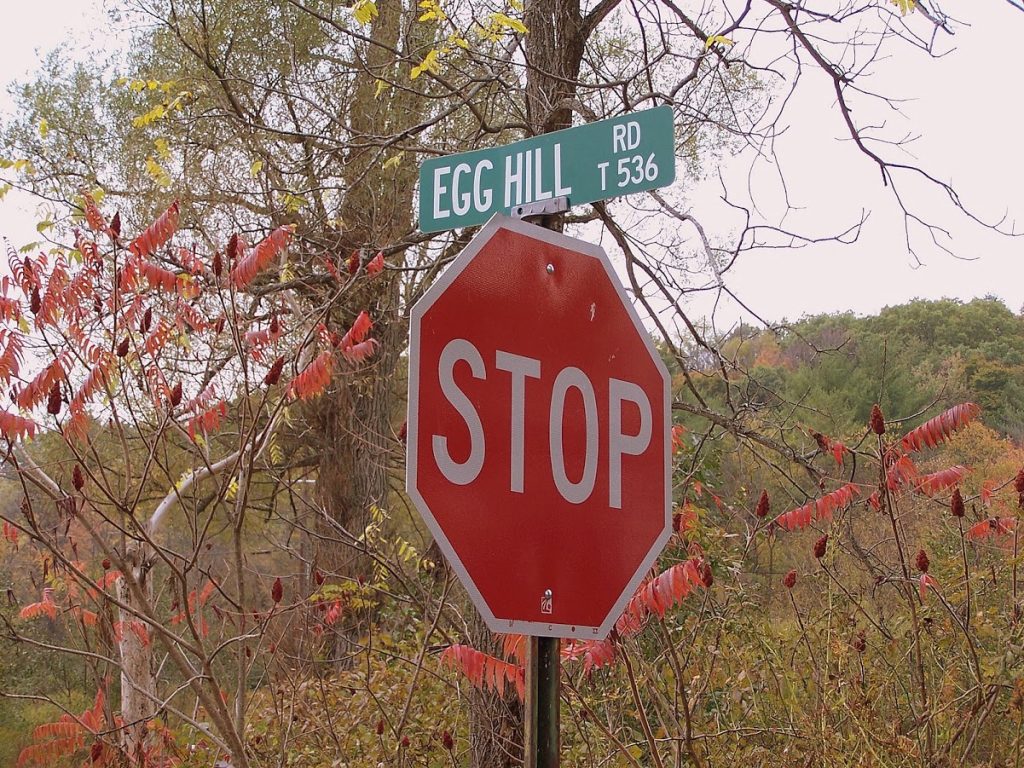 According to a blurb, I had found on the Internet, some students from nearby Penn State University stole the original church bell as a dare. They were caught and as punishment, forced to place the heavy bell back where it belonged and probably other legal penalties. The property is a historic burial ground in Pennsylvania and if people are caught vandalizing it, the penalties are stiff. Homes have been built around the church so it’s not as isolated as it once was.

As you drive up to the church, it’s quite shocking. It really is a perfect setting for a horror film. A small, old cemetery is to the right of the church. Some of the people buried there had been born in the 1700’s and there were even modern burials from the 2000’s. 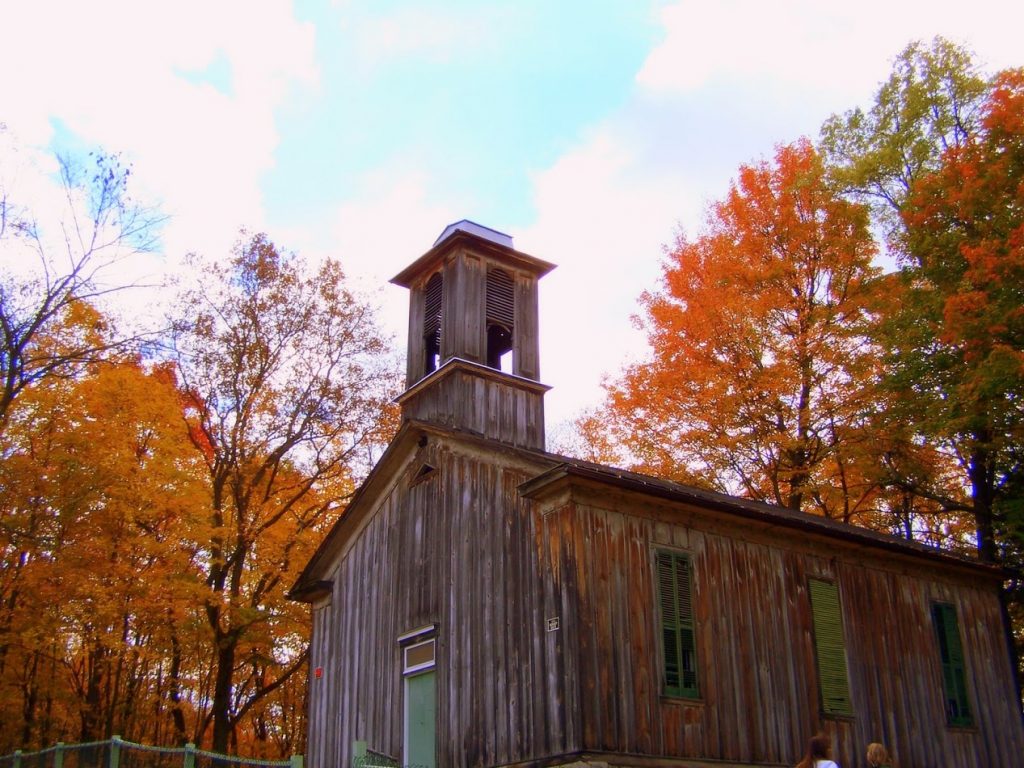 We wandered the cemetery, glancing down at the stone reminders of the life that once was, reading old inscriptions and taking pictures. You can’t enter the church, but there was a little opening in one of the old wooden shutters where I could see the wooden pews inside. The church still opens a few times during the year and hosts the occasional rustic wedding. But did the heinous story associated with the church ever take place? No, it didn’t., and there’s no historical evidence to prove such a tale ever took place. But like all creepy buildings, a legend always comes with it. It’s a package deal. 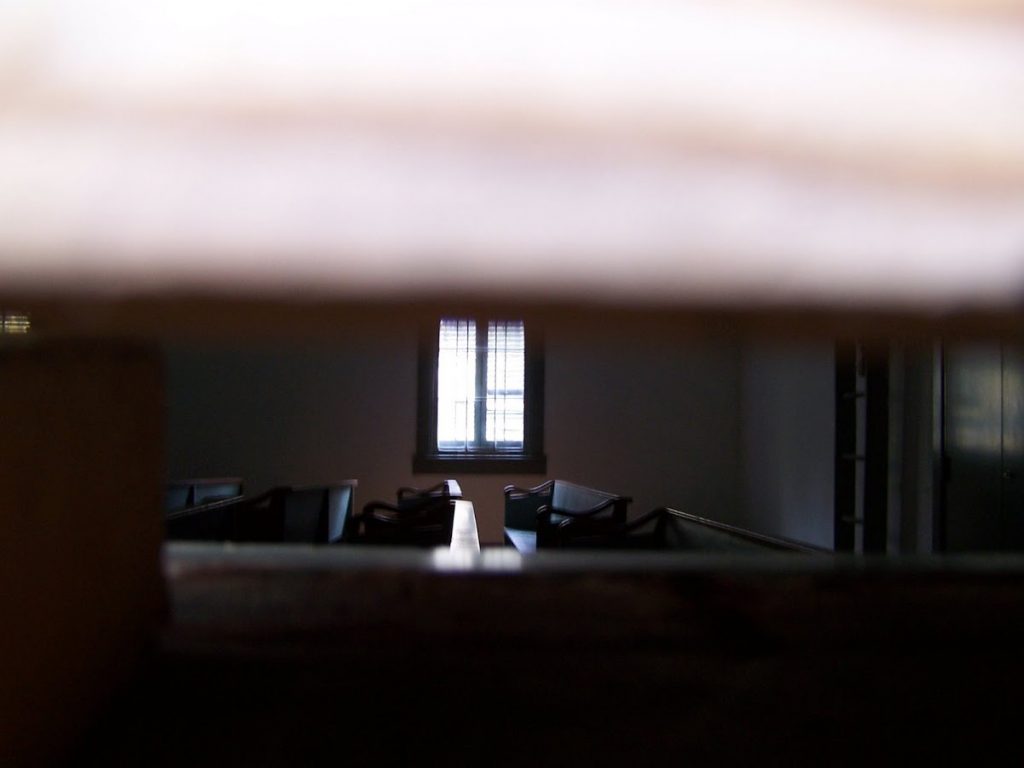 A peek inside from the crack in the shutters. Photo © The Spooky Attic.

Years ago, I had this story posted on my other website, Michigan’s Otherside and received this email from a local man who had been involved in the Egghil Church bell heist. He regretted what he did, but became deeply disturbed by events in his life after that night.

DOES THIS CHURCH HAVE THE POWER TO CURSE PEOPLE?
Written by J. Johnson

I stumbled upon your article about Egg Hill Church in Centre Hall, Pennsylvania. Once in a while, I’ll do a web search of the place because I’m always trying to get to the bottom of what actually occurred there so many years ago. Is it all just a hoax? Or does some sort of evil presence really inhabit those grounds in and around the Egg Hill Church? After years of personal torment, I am convinced that something evil existed there and still does. In your article, you alluded to an incident where several Penn State students vandalized the church. I was there the night that happened, but I didn’t contribute to the vandalizing. However, I was guilty by association because I helped transport the bell back to State College after it was cut down. In hindsight, I wished I’d never been part of the act. I can give you the Cliff’s Notes version of my story. I think it may help me resolve what happened there that night in 2003. Here it goes.

I was a student living at State College for the summer. I’m a Pittsburgh native and my father suggested it would be a great idea for me to finish my remaining nine credits during the summer semester. I didn’t argue. As it turned out, the decision to stay in State College that summer was perhaps the worst decision I’ve ever made. I contribute a lot of my misfortune in the years after to the bad decision made that summer and choosing to be involved in the “Egg Hill incident.” I can attest to one thing – my choice to take part in helping steal the church bell has ruined my life in certain regards. I wish I could go back in time and change the events of that night. My ill-advised decision to step foot on the grounds of that churchyard has haunted me ever since. 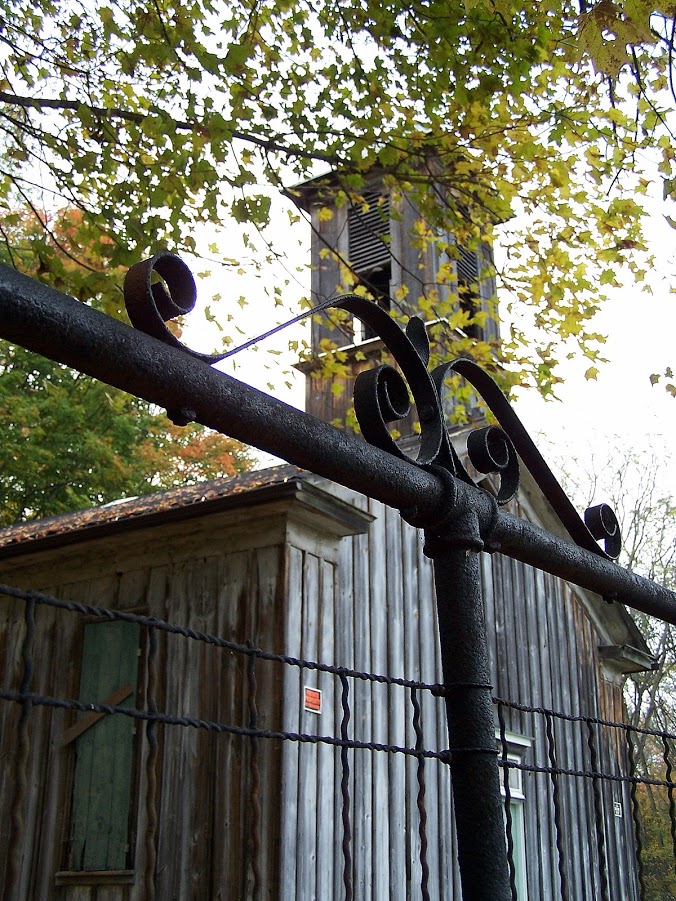 That night, we stood around and watched as one person cut the bell from its supports and let the 60-pound iron teacup fall, crashing through the tower shaft and onto the basement of the church. We decided to hang around for a while and crack some beers. One kid, “CQ,” was just demented and mocked my Christian beliefs and me as he proceeded to perform a generic séance in the church basement. Being the out-of-towner, I was unaware that CQ was such a degenerate, or I would never have been with them that night in the first place.

My good-natured but simple friend, “LM,” was kind of the ringleader, and he was all for taking the bell back to State College to show the town locals how big his balls were for going into an area that was so widely regarded as “evil” or “haunted” and coming out with his “trinket.” I realized at that point that I couldn’t escape the inevitable – those guys were not leaving that church until they had the bell in the bed of the F-250, and they needed me to help them lift it in. At that point, I was a nervous, scared wreck and I was kicking myself for even agreeing to go with them to the church. I’d heard the legend regarding the minister who supposedly killed his congregation and the kids in the basement, so I agreed to go along because it was a rush for me to visit this so-called “haunted” place. 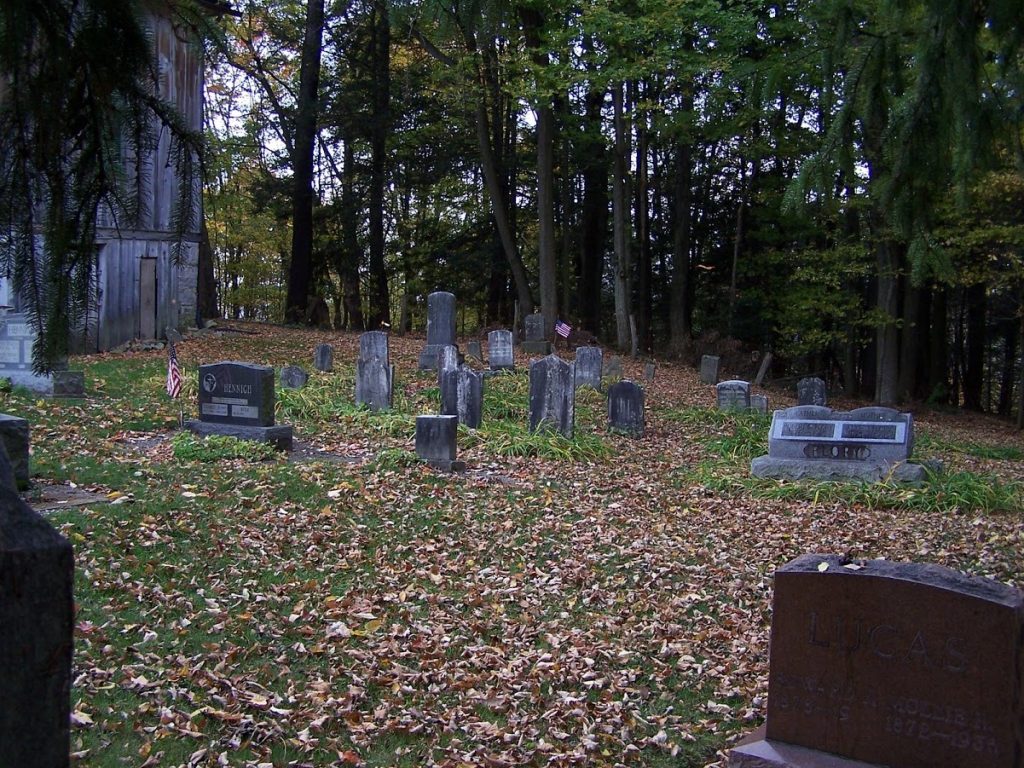 I should’ve told them to leave me at Raystown Lake where we had been fishing all day. I’m not sure what we uncovered there that night in the basement, but I don’t think any of us involved in the incident have ever been the same since. Aside from the numerous fines and humiliation that awaited us in the wake of our prank, we’ve all endured our fair share of punishment. How stupid we were.

After the story got out that the Egg Hill bell was in LM’s apartment, the cops were all over it. But before they had a chance to reclaim the stolen property, we stashed the bell in a farmer’s junkyard/field out in the middle of nowhere and denied the whole thing. Thanks to LM taking the heat, the cops never questioned me and it was as if I had never taken part in the event.

At the time of the incident, I could say that I had my life figured out. I was going to graduate from Penn State with a degree in secondary education, having just come off two semesters on the Dean’s List. I was going out with a bang, having a good time while still maintaining my academic obligations. I had made some connections in the educational world, and it seemed like I was also going to land a teaching job. Needless to say, I didn’t receive my teaching certificate on time, and I’ve never completely gotten my life back on the right track. Back to the story.

Not even a week after helping my local buddies with the bell heist, two of them were brought up on charges for theft and vandalism. Luckily I was not one of them, but only because LM, my one true friend in the group, insisted to the police I had not been involved. LM’s record took a hit, and I offered to help him pay his fines. In some ways, I feel as if I’ve suffered worse than any of the others. I lost something much more valuable; I lost my spirituality. I felt like God disowned me after taking part in the incident, as harmless as it seemed when we committed it.

The week after, I was accused of plagiarism for lifting a paragraph from an encyclopedia article on the internet and not citing it in a research paper. I failed the class and I never did graduate on time. My parents kicked me out when I returned home after I failed to meet their expectations, and my transcripts are forever tainted by my plagiarism charges, which have made it nearly impossible for me to ever obtain a teaching job in the state of Pennsylvania. This could have been a coincidence, but I felt like I was being punished from above for my involvement at the church. I was a practicing Christian who got mixed up with the wrong people at the wrong time. A harmless Friday night fishing trip at Raystown Lake gone wrong–some Christian I was, eh?

Since Egg Hill, I’ve never been able to reclaim my previous state of Christian spirituality. I feel that just being there that night, my soul has been tainted. Black was all I felt for months after my involvement. I felt like my soul had been sucked out of my body. I used to wake up in the middle of the night screaming in my sleep, the image of standing in that dark, grotesque church basement always there as I woke up. This wasn’t just a temporary issue; I’ve had midnight tremors and night time hallucinations for years now. Something I can’t explain happened to me that night, and I honestly feel that some sort of evil encompassed me that I have never broken free of, even a decade later.

I’m still trying to get my career on track. I fell away from God and my Christian fellowship. I’ve become a nervous and paranoid person who is afraid of the dark. I should also mention that I suffered from a serious allergic eye infection shortly after my involvement in the incident – a minor but weird coincidence. As a former man of God, I’ve always believed that all people are plagued by demons or demonic influence – some worse than others. I also believe that Satan wants to see all of us fail, and I was one of the dumb ones who let him in too easily. Aside from the sleeping disorders and hallucinations, I’ve battled with the following demons if you will: drug dependence, depression, anger, and envy for those who have achieved their goals in life– I’m still seeking mine.