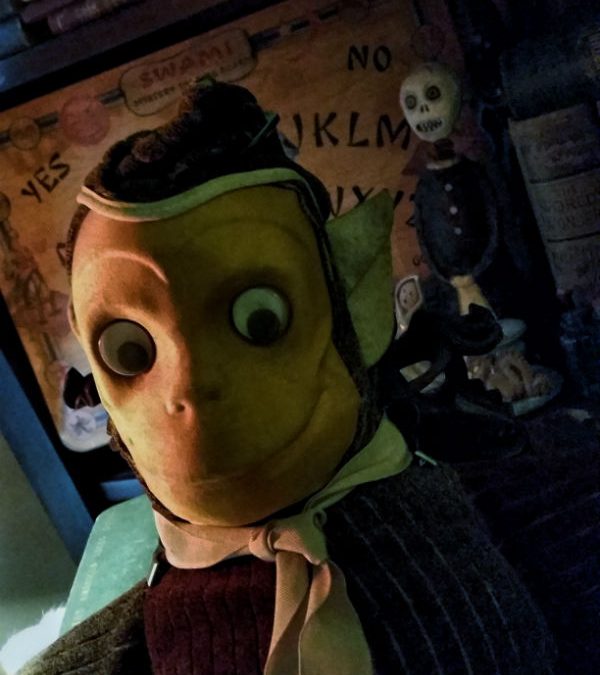 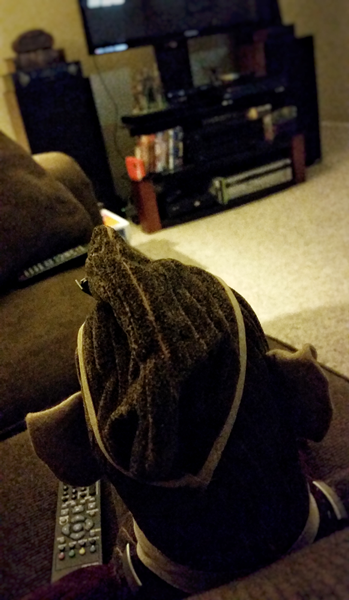 I have a strange little pet. He’s not real, but it seems like he is. He scares grown men and he has the kind of eyes that watch you no matter where you stand in the room. He came from an estate sale, (like all creepy things do), and he demands a place on top of the couch. He likes it there. He watches his shows when no one is home.

When one of our friends would spend the night on the couch, Monkey had to be moved into another room. Our 42-year-old friend could not find himself able to drift into a peaceful slumber under the ever watching eyes of Monkey. 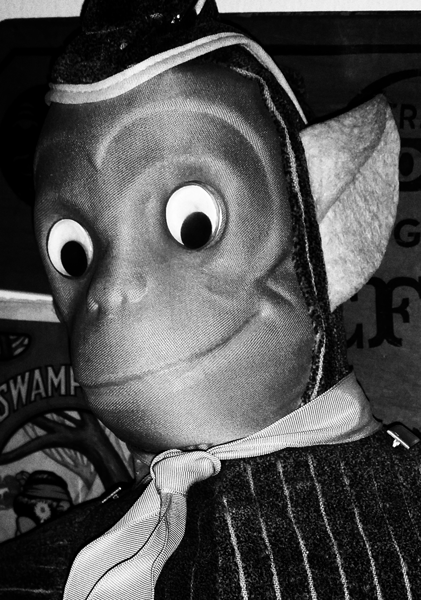 Monkey likes to play tricks on people and one night, he came up with a particularly good idea and got me to go along with it. My old roommate did not appreciate Monkey like I did and he knew it. The roommate slept with a fan running for white noise, so it was easy to quietly open her door without her hearing anything. Per Monkey’s request, I placed him at the foot of her bed, sitting upright, holding a butter knife.

When the roommate awoke in the morning, she squinted at the brown blob at the foot of her bed. Rubbing her eyes, she thought it was shoes for some reason, but when she put on her glasses, she saw otherwise. There sat Monkey, with that odd smile on his face and the dull butter knife resting on his stuffed legs. She had no idea how long Monkey had been on her bed. She didn’t know what disturbed her more — Monkey, or that her roommate had quietly crept into her room while she was sleeping, and placed a stuffed animal holding a butter knife on her bed.

“There sat Monkey, with that odd smile on his face and the dull butter knife resting on his stuffed legs.”

Monkey lived in the attic of an old house that belonged to a World War II nurse. (I also own a lovely, antique suitcase she owned, complete with authentic travel stickers from around the 1930’s and 40’s. Picture to come later.) Later in her life, she offered her nursing services to people at their homes. If they couldn’t pay cash, she would accept objects if they wanted to part with a lamp, book, or anything else. She began to acquire quite the collection of things.

Monkey had military pins all over him and given the fact that he seems to have on a cute little military outfit, he may have been designed for the purpose of displaying pins, but I haven’t been able to find out who made him or when. I am also not aware if the pins had belonged to her husband or a family member. So I’m introducing him to my Spooky Attic. Maybe someone knows a thing or two about him. If they don’t, he seems to be one-of-a-kind. 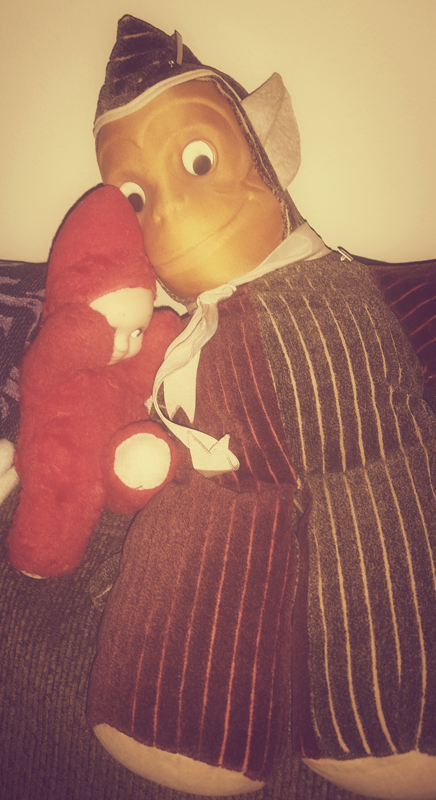 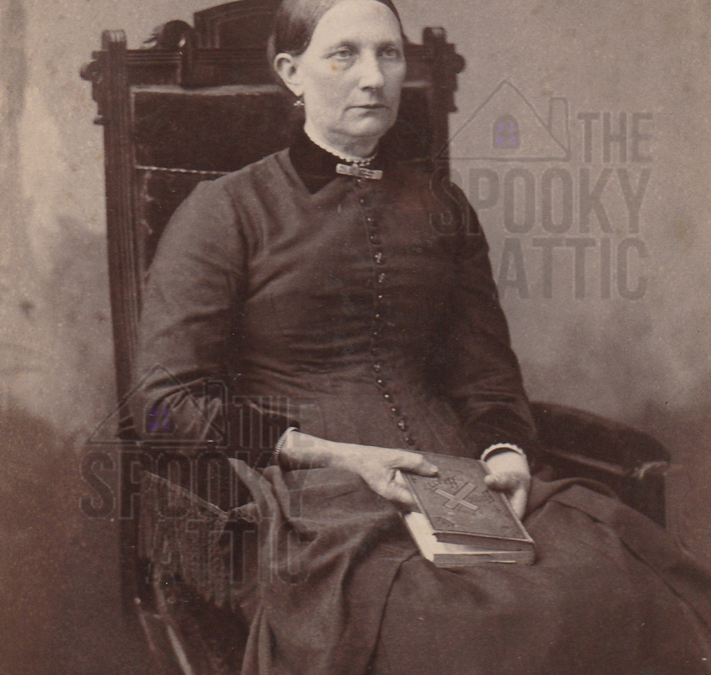 I collect old photos. There’s actually a term for it called, “found photography” – the recovering of unclaimed and forgotten photos from the past. I feel like by owning these images, a little piece of them is still alive somehow. Going through a pile of pictures in an antique store, I found this stern looking woman who quite honestly, looks dead or drugged, so I nicknamed her “The Dead Face Lady.” She looks so lifeless with her blank stare, severe hair and Bible prominently displayed on her lap. The photo was most likely taken in the 1890’s. I don’t think I would have hung out with her. I wish there had been a name on the back of the picture so I could have learned more about her. 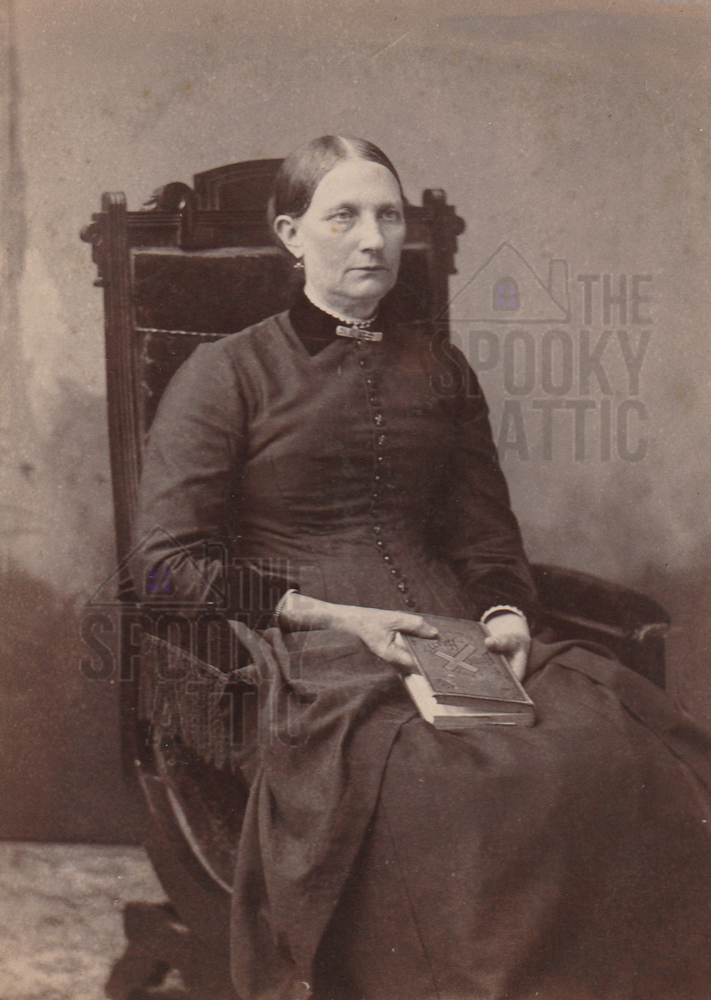